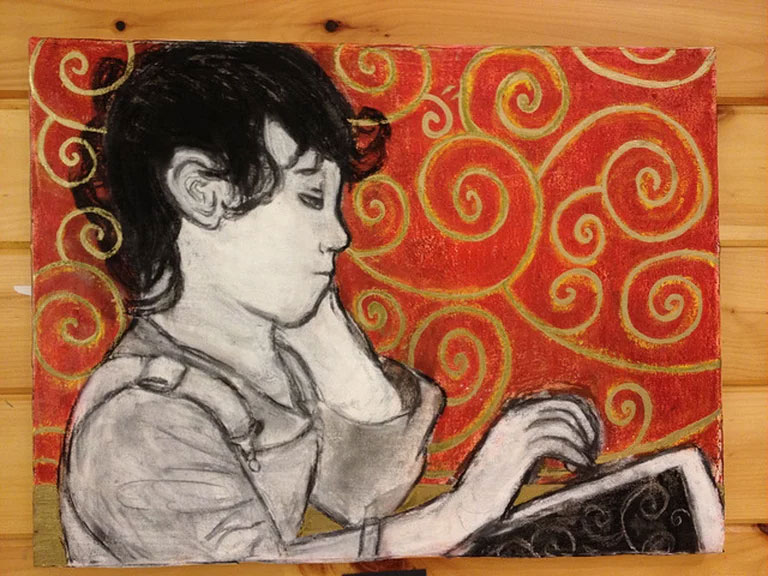 Who:  My name is Rebecca Cutter, and I live in Portland, Oregon.  Backstory: As a college student I studied art history, design and various studio arts.  Later, I was drawn to performance (improv) and writing.  I’ve been a writer of creative nonfiction for thirty-five years, shifting to screenwriting ten years ago.  I have a Masters in Psychology and am a retired psychotherapist.  I’ve taught courses on psychology and creativity, coached artists and facilitated workshops for artists at all stages of development.  I am a mother and grandmother.  This background allows me to address both the internal and external challenges artists face, as well as, the added layer of biased cultural expectations for women, especially in, and after, mid-life.  Content: Whether you are on the VERGE of launching a career, the VERGE of success or the VERGE of abandoning your dream, this blog focuses on being a woman in the Arts today. In these posts, I will share not only information I think may be helpful, but also my own creative adventures, as well as insight gained from the ten million mistakes I’ve made. I’ll toss out quotes to inspire you and questions to shake things up a bit.  I will definitely demonstrate that it can never be too late!  Whether here, or in my private practice, my goal is to save creativity … one artist at a time.

I want to start with a quote I read before each talk or workshop.  It is a jewel from playwright Romulus Linney (father of actor, Laura Linney).

No one religion can console this enormous country.

No single philosophy convince it.

No therapy relieve it of its burdens.

No legal system comfort its injustice.

No medicine deliver it from pain.

No government give it joy.

Only art does that.

I’ve never put myself out into the virtual world.  I am an introvert and a technophobe. Proof?  Last month I bought my first cell phone.  It’s still in the box.  I’m not even on Facebook.  I’m telling you this, because I’ve spent the entire week doing everything I can to avoid launching this blog.  I’ve never felt so exposed.  In the past, the target was simple; anything I published landed first on my editor’s desk.  But this is different. This is buckshot, landing who-knows-where.  So, meanwhile, I clean house, rake leaves, wash my car and delete ancient emails.  I do all this because my brain is sending me in circles, while it circles the wagons.  I tell myself that editing this one more time won’t get me closer to perfection, but it might get me in off the ledge.

Welcome to my brain …

This is what creative risk feels like.  Unfortunately, for too many artists, it’s enough of a barrier to prevent them from living authentic lives.  And, that’s a tragedy.  I finally made it to the keyboard, because I remembered that sometimes our mind misreads our body’s signals (rapid heart rate, hyperactivity) and sends us the wrong interpretation:  I took a deep breath and realized I’m not knee-deep in anxiety … I’m swimming in anticipation.  What I’m actually feeling is akin to the electricity before stepping out on stage. Writing this blog is exciting.  I’m thrilled to have this opportunity.  (Especially since little old ladies are regarded as irrelevant and invisible.)  I think the best approach is for me to consider this launch an improvisational act.  Which – by definition – means I will have to abandon all expectations, relinquish control and just put it out there.  No net.

Every creative project is a problem to solve:  How do I get the idea/vision in my head out into the world?  Transform the subjective to objective?  An audition is a problem to solve.  An empty page, stage or canvas is a problem to solve.  Problem-solving is catnip for your brain.  Yet, artists are often disappointed with the outcome.  If disappointed often enough, you’re likely to give up entirely.  In addition to anything spiritual or sacred about creativity, there are distinct stages to the creative process and each has its challenges.  Also each artist has her own strengths and deficits, which translates as enjoyment in some stages and frustration in others.  Because of its nature we can’t “capture” the mysterious and examine it in order to use that information.  But we can deconstruct the distinct stages in order to increase our “success” and produce “meaningful work,” however you define these.

Information is power.  The most powerful information is information about you.  If you are on the verge of considering a major shift in your creative work (i.e. changing medium, contemplating a major risk, or giving up entirely due to a chronic sense of dissatisfaction) that can cause a disorientation.  A sort of paralysis may set in, and the longer you wait to attend to this crisis, the harder it will be to return to yourself.  To get back to work it’s vital to understand how you arrived at this point — and what you will need to remain in the studio, behind the camera or at the keyboard.

In addition to the creative process, and what you attempt to bring to it, there is a third category of challenges for all of us: the “Real World.” Within its highly-competitive environment, we must also wrestle with cultural biases and multiple – often conflicting – social roles we need to fill in our homes and community.  In the face of all this, it’s amazing that a single word is ever written, a line is ever uttered, a note is ever played or a stroke is ever made.  Any work that is out there is a testament to the power of passion, dedication and determination to overcome the odds.

Oh, I forgot.  There’s also bad luck.   Pull up a chair.  I’ll tell you a story.  A story about when I did all the hard work, and managed to buck the odds — at the time about 30,000 to 1– and got my first book published.  At the time I was also writing a novel, and, early on, gave it to my computer-engineer husband to read.  He returned it with nothing but a couple of punctuation corrections.  His single verbal assessment was, “Okay.  I guess.”  Hear me on this: for feedback on your fiction, share it with fiction writers and people who actually read fiction.  My husband read manuals and reports.  I did not realize I had misdirected the draft.  And I took his lack of enthusiasm about my endeavor as reason enough to stop writing.  And I did.  But not for long, because I’m not “myself,” if I’m not writing.  So, I decided to explore creative nonfiction and examine how very different ways of looking at the world impact intimate relationships.  This led me to put my own marriage under the microscope, devolving — a year after publication — into the dissecting of divorce and twenty years later, an autopsy.  But that wasn’t creative “bad luck,” because it spawned a (current project) memoir.  The creative bad luck of this story was preceded by everything a writer dreams of …

Turns out, other people were also interested in how I was exploring couple dynamics, and I found a great New York agent (against odds) and she, in turn, was able to get my manuscript to “auction,” with four major publishing houses.  In the end — including foreign rights and books-on-tape — I ended up with a first print of 50,000 copies and a six-figure advance.  (For non-writers, an “advance,” does not have to be paid back.  It is recouped out of the sales from a book.  If it sold only a single copy, I would still be able to keep the entire amount.)  So, if the reason I wrote it was to make a bunch of money, I could end the story here.  But that’s not why I write.   And I planned to keep on writing into the future.

The huge advance reflected their belief in the future success of my work.  (Publishing houses do NOT invest heavily in “iffy” projects.)  At that time publishing houses could also afford to invest thousands of dollars in promoting their authors.  So, in the Fall of 1995, they sent me on a two-week, multi-city media tour across the country, starting in New York City and ending in Seattle.  I was put up in the finest hotels, and a town car was at my disposal should I need to go somewhere.  I could order anything I wanted from room service.  But I was a virgin and not sure what the “rules” of a book tour were, so I never did; nor did I open the little fridge of gourmet delights in my room, because I didn’t want to create any extra expense for the publisher.  Still it was a far better honeymoon than my actual one.  But without sex.  Unless you count cheesecake from the corner deli.​

O.J. Simpson, Timing and the Titanic

If you’re still with me, but feeling nauseous due to my unbelievable luck, look at the date.  By the time I landed in New York City — to hold up my end of the contract — O.J. Simpson’s trial had begun.  It was the only thing on television, no matter what channel you chose, no matter what time of day.  The shows I didn’t get bumped off (translation: NPR) had small audiences.  This was pre-Internet, when television was THE medium, so — despite good reviews in print — I was on the Titanic, as far as the publishing house was concerned.   Like I said, I made a ton of money, but what I didn’t achieve was the ability to publish a second book.  I now had the “stink” of failure.  It didn’t matter that I was never able to get launched as they had planned.  They were never going to recoup their loss.  So when I had another manuscript to shop, or went hunting for a new literary agent after mine retired, the conversation never went past “how did your last book sell?”

The business of art is a huge chunk of that “Real World” stuff.   If you’re creating because you want fame or money, your ability to achieve either of these is compromised.  But, if you’re creating because you can’t imagine doing anything else, and you will put in the time and do the work, then you have a chance.  It’s been over twenty years since my book tour.  The publishing world has changed.  But in that time I’ve never stopped writing: a children’s book (including illustration), a novel (which evolved into a screenplay), over sixty essays (one of which evolved into a screenplay, which is currently under serious consideration by a producer at HBO) and the aforementioned work-in-project memoir.

Something to Think About

According to a recent article in The New Yorker, the median amount of time spent looking at a work in the Metropolitan Museum of Art is seventeen seconds.  So the next time you see, or listen to or watch another’s work, commit yourself.  Do it without multi-tasking.  Give it your all.  The artist did.

What do you expect from an artist when you experience a work?

What do you expect from yourself when you put your work out there?

What needs to change for your work to be more satisfying for you?