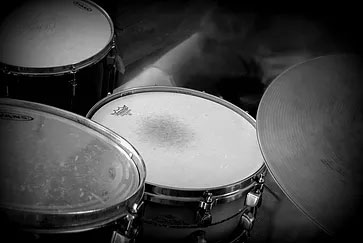 My name is René Ormae-Jarmer and I am a musician/teacher/performer living in Milwaukie, OR in this lovely United States of America.  I am very honored to be blogging about all things performing arts with a focus on women in the arts.  Why should you read this?  Well, I hope it’s because you find value in the arts as a way to enhance and reflect ourselves, our society, and even bigger—our world.

A little about me: I’m a professional drummer and pianist with a B.A. in Music Performance from Lewis & Clark College. I’ve been teaching and performing for over 25+ years. I do this for a living.

Piano/Keys/Songwriting:  Teach all styles, record and gig with piano-pop rock band Here Comes Everybody.  I perform at events, weddings, write music for groups.  Belong to a Immersion Composition Society—Veronica Lodge (6 songs within a 24 period once a month since 2004).

I have toured with bands, released numerous CDs, Vinyl, been on TV, Radio, opened up for National Acts, played for thousands and played for absolutely no one.  I have come up through the ranks in my own education as a female drummer and musician and have had many experiences that define me as a musician today.

THE BIG BLOG QUESTION FOR TODAY:

Since this is my first blog for Artemis, I was tasked with not only introducing myself, but the blog subject itself was pretty broad: Women in the arts. As a female in the arts and in a male-dominated world of percussion and music in general it’s such a huge subject, so I will endeavor to take it on with some personal experiences and my perspective (which is ever-changing). I would like to start by saying that I do believe women’s voices in the arts are often limited by the systematic constructs and age-old constraints set up by mostly men, and filled with judgments, stereotypes, and ignorance, even to our own detriment. Wow!? You say those are big words and sound very negative. Well, let’s look at it….

Women have only been able to have the right to vote since Aug. 18, 1920. Now that’s less than 100 years ago… So fundamentally, we have not had a voice or been taken seriously as part of a democratic society for very long. Imagine this in an arts setting: Who were the judges at art shows, musical performances and contests? Mostly men. Even looking at American Idol the judge makeup is 3 to 1 (3 males and one female). Since women were delegated to the home and hearth, men made up most of the musicians in marching bands, big bands, and mostly the entire music industry. There have been some female groups, but the marketing and message is based mostly on sexual appeal. If you belonged to a musician’s union, it was run by men, populated by men and men were creating opportunities for other men for employment and union protections.

My experience: In 5th grade, as a product of a strong well supported music education in the 70’s, I was asked what instrument I wanted to play. I chose drums. The exciting, loud, flamboyant idea of making some musical noise really appealed to me. I was handed a bell set and a practice pad…..and I cried. I stuck it out however, and learned the entire percussion family over time. However, during the 80’s, 90’s, and even today, I still am met with skepticism, disbelief, and surprise when I tell people what I do. I am an anomaly. I am a female drummer and percussionist with credentials, experience, and yes, I can actually play. Right now, I am the only female drum line instructor (called a Caption Head) in the state of Oregon for any level drum line. I happen to teach Rex Putnam Kingsmen Thunder in Milwaukie, OR.

So before you, my dear reader, decide that I’m an angry feminist, know that I did take feminist theory at Lewis and Clark during my music degree studies, and I actually did run around for about 3 months super angry at the whole patriarchal society.  I saw injustice everywhere, I saw phallic symbolism everywhere, I was just pissed!  But my colleagues are men, my teachers are men, I’m married….I love men (most of the time).  At some point though, being a strong female drummer comes down to either you can perform or you cannot. Gender shouldn’t be an issue right?  Welllllll, it does come up.

Here’s some sound bites that I have heard my entire life when I tell people what I do and who I am:

Women are supposed to play soft and nice instruments, not make loud sounds, or take charge, which is necessary for drummers to do since they are the backbone of any group. The result is missed opportunities, lack of confidence, perpetuation of stereotypes, and perhaps the worst of all:  women also keeping women “down” in the arts. One thing that chaps my hide worst than being overlooked or insulted by a male, is that some women help perpetuate this by championing a female that is well, not that great, but is visible. There are several female drummers who are considered icons of the Portland music and NW scene that I take issue with. I believe that some of these women are simply lucky and connected, but don’t take their craft of drumming seriously, and others are just loud about doing it passionately, but without formal training and a seriousness that would back up them getting all this attention in the first place. So in short, they get put on a pedestal just because they are female. So at the risk of this blog going on and on forever, I applaud you for sticking with me this far, I will leave it there.

Drums good, fire bad, complacency bad, awareness good, historically fundamental male-dominated systems: bad. I hope that this first blog got you, dear reader, thinking. We are out there, we are working hard to change the landscape of women in the arts. We do have a voice. Mine is just one. Thank you for reading! I welcome any kind of feedback, love letters, and responses.